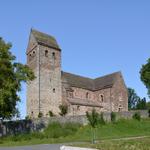 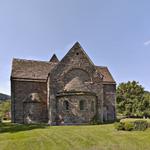 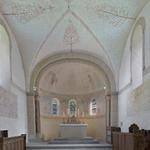 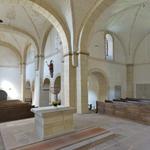 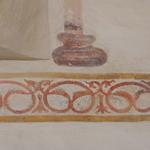 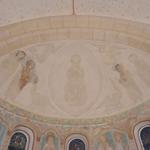 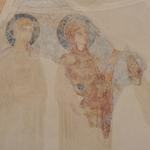 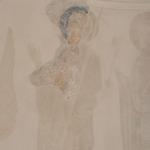 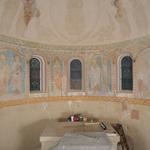 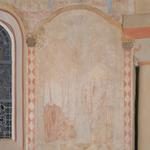 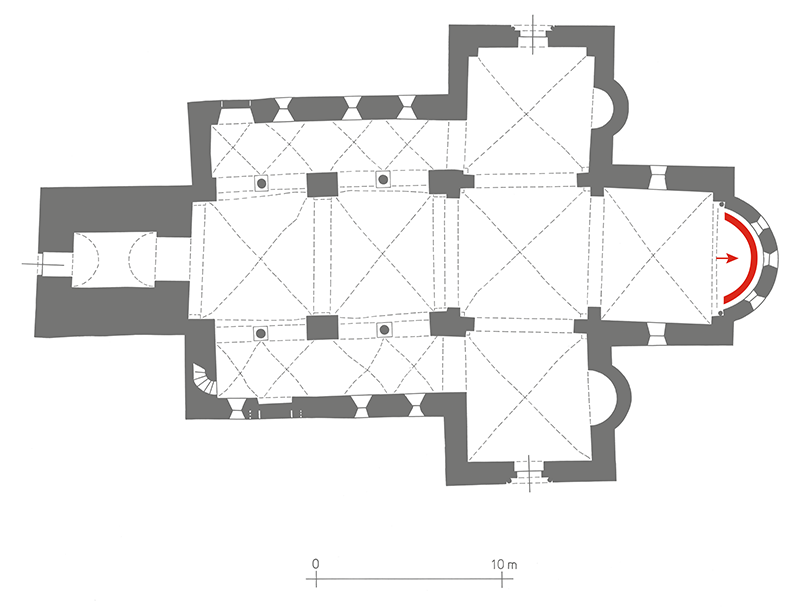 Lügde, Catholic Church St. Kilian, ground plan (The mappings (German version) can be opened by clicking on the red markings).

Building structure
Last third of the 12th century. Previous building from the early 9th century with later extensions. The west tower from approximately 1100 was integrated in the new building.

Building data
Last third of the 12th century. Previous building from the early 9th century with later extensions. The west tower from approximately 1100 was integrated in the new building.

Romanesque polychrome architectural decorations
In St. Kilian there is still a considerable number of vault paintings preserved of the so-called “Westphalian painting type”. The accompanying ornamental ribbons along the groins and the tree-of-life motifs growing in the three bays show to a great extent the original shapes. After its exposure in 1939 the existing original paintings have only been infilled, almost the whole of the original lineament is still legible, at least in reduced form, and has only been reintegrated to enhance it. The diversity and variation of the related multitude of motifs used is especially remarkable in the nave where individual ochre-coloured and black areas have been integrated within the otherwise red tree-of-life motifs and where the remains of figures can be found that – also like the tree-of-life motifs – indicate Paradise. Of the painted architecture that framed all windows of the church nave as far as the choir, there are only a few remnants that have been preserved and that today can just be made out when looking closely. The clerestory windows are framed at the sides by painted columns that are set on a leaf frieze that runs along below the windows. Below the choir windows painted wall hangings are placed. In the rest of the church interior the silhouette-like re-shapings of the painted arcatures from 1939 can still be seen. Bases, shafts and capitals are set on a light background as spatially understood individual parts whereby particles of original paint substances have been integrated.
Today all architectural elements are ochre-coloured with red joints. This colour is not confirmed by any findings.

Figurative Romanesque wall painting
Choir apse: in the calotte a few remains of a Christ in Majesty, extended to a Deesis group with Saints, on the apse wall a row of Apostles beneath architectural canopies.

Crafting technique/painting technique
The preparatory drawing in yellow ochre was applied onto the single-layer, well smoothened, but not lime washed or levigated plaster. One can presume that the already dry plaster was freshly dampened in order to apply the paint. On the other hand, for the extensive filling of individual parts, the painter used yellow ochre, for the apostles also iron-oxide red, individual contours were then traced in red and here and there also in black. The application of red lead (now blackened) to the halos indicates gilding, of which there are no remains. The backgrounds of the apostle figures in the calotte were kept in blue by using the pigment azurite.

Conservation history
Polychrome architectural decorations 1939 exposed and conserved, again conserved in 1976 and 2010.
The figurative wall paintings in the choir apse were partially exposed in 1862 and completely exposed in 1872/73 and painted over in a historicising style. Further revision of the overpainting in 1938. In the apse calotte the few remaining wall paintings had to be detached for structural purposes in 1957 after removing the overpaint. In 1961 these were repositioned and conserved, the reconstructed figure programme in the calotte were reintegrated in sketch-like contours in grisaille on new plaster and of the row of Apostles below it the southern pair of figures was exposed without its architectural framework. The overpaint of the remaining row of figures in the apse wall remained intact. In 2010 repeated conservation of the existing paintings.
In the areas with visible remains of Romanesque paintings, in particular in the case of the Apostles only the partially al fresco fixed earth pigments of the preparatory drawings and inside colourings are still preserved. The further elaboration of the paintings by fine drawing, modelling, highlights and gilding has been lost.

Description and iconography
In the apse calotte the Enthroned Christ which has been lost today, was depicted within the mandorla which was surrounded by Evangelist symbols. On his right-hand side is his Mother Mary with raised hands and the youthful favourite Disciple John, on his left-hand side John the Baptist and a further, non-preserved Saint, presumably St. Kilian as patron saint of the church. In the sketchy reconstruction of the former Christ in Majesty extended to a Deesis by the Saints the few remains of Romanesque figures of the two Johns and Marys stand out distinctly.
On the apse wall there are six Apostles, each in couples arranged below a continuous row of canopies. On the left of the central window only one Apostle is depicted due to low distance between the windows. One can presume that the row of Apostles was continued on the walls of the choir bays with one further couple each. John in the calotte presumably counted as one of the twelve. The two exposed Romanesque Apostles cannot be identified due to the lack of attributes. Both are standing facing each other in three-quarter profile.

Art-historical classification
The representation of the folds of the robes, in particular those of the Apostles, is still free of any features of the Zackenstil (Jagged Style). There are brush strokes that begin narrow and then become wider and bend gently upwards, therefore do not show the usual hooks typical for the Zackenstil, but rather rounded, loop-type shapes.
The many features they have in common with the wall paintings of Neuenbeken – right up to small details – make an origin from the same period probable for both pieces of work. Their close correlation can be regarded as an important result of the examination. The few preserved fragments in Lügde can therefore be attributed to a larger circle of better preserved paintings. The new dating of the Neuenbeken wall paintings at 1210 supports the classification of the paintings in Lügde in the first quarter of 13th century.

Dating
Around 1210. Polychrome architectural decorations in two phases around 1170 (nave) and at the beginning of 13th century (choir).